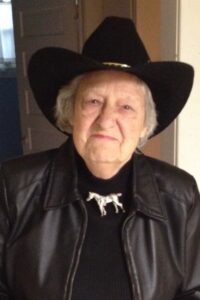 Wilma Ryan Hardy was born February 11, 1927 in Leavittsburg, OH and passed away under the tender care of the staff at Morning Star Memory Care in Boise, ID on August 1, 2021.

She married Philip Hardy on July 8,1955 in Warren, OH and lived in Cleveland and Circleville before moving to Solon in 1964. She was a full-time homemaker and was active in her church, Pioneer Presbyterian where she taught Sunday School and helped with Wednesday Night Live and Pioneer Club along with summer Vacation Bible School. Wilma loved children and they adored her. She loved to entertain and always had sweets in the house ready for company. Both Wilma and Phil spent a lot of time visiting family in Warren and could be found in the bleachers at many sporting events. Wilma was also an active member of the Solon PTA, Chagrin Valley Woman’s Club, the City Club of Cleveland and the Christian Women’s Club. She also was active in helping with the National Barrel Horse Association by working in the office, being a hostess at horse shows and even received a 10 year award for serving from Billy Morris at the age of 87!

Wilma was preceded in death by her husband Philip and brothers Charles Ryan and Kenny Ryan and sister Marjorie Ryan.

Wilma lived a blessed life, loving her family and her friends. She always found good in everything and in everyone.