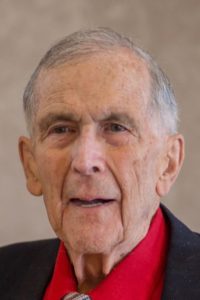 William Slade III, 94, of Solon passed away April 2, 2020. Born in Berlin, New Hampshire May 8, 1925, Bill grew up in Shaker Heights and Glendale, Ohio. After attending early school years in Shaker, he continued his schooling in the Glendale schools outside of Cincinnati, except for a year when his family lived in Vienna, Austria. For his senior year of high school, he attended and graduated from Kimball Union Academy in New Hampshire. Following high school, Bill was drafted into WWII where he spent 2½ years. Upon returning from the war, Bill attended Middlebury College in Vermont and graduated with a Bachelor’s degree. After a short time working at Halle Brothers as a supervisor of the invoice office, Bill took off to live in Paris, France for two years. While in Paris, Bill found work as a security officer and messenger, working for the US government’s MSA (Mutual Security Agency) during the Marshall Plan years. After two years of working and traveling in Europe, Bill returned to Shaker Heights and began working at the Cleveland Hardware & Forging company where he met Dorothy whom he married in 1956. He completed a Master’s degree in Education and started a teaching career that spanned 28 years. After about five years of living in Eastlake and working for the East Cleveland Schools, Bill and Dorothy moved to Solon in 1961, raising their daughters Laura and Janet while Bill concluded his career teaching math at Orange High School. After retiring in 1984, Bill and Dorothy enjoyed traveling in their Airstream trailer with WBCCI, traveling and skiing in Europe, golfing, playing bridge, and spending time with family, friends and their kitty.

After Dorothy’s death in 2011, Bill continued his travels with his daughters, and at times, their husbands. A trip to Alaska, the Caribbean, Vegas, Glendale, Colorado, Quebec City and numerous trips to Europe and Vermont have kept him busy for the last nine years. He also continued to enjoy visits with friends and family, with the newest family members – his four great grandchildren, Danny, Phoebe, Billy and Adam – keeping him entertained!

Bill is survived by his loving children Laura (Drake) and Janet (Chuck), dear grandchildren William (Stephanie) and Christine (Steve), and four great grandchildren. A private family service and burial will be held at Mount Hope Cemetery in Solon. A Celebration of Life gathering will take place later this summer. Memorial contributions may be made to World Neighbors https://www.wn.org or Disabled American Veterans https://www.dav.org