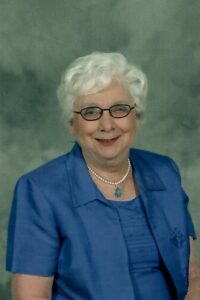 VIOLET EILEEN ZERULL, September 25, 1928 – January 16, 2023. Violet, or “Miss Vi” as many lovingly called her, was born to Gustav and Wanda Gertz on September 25, 1928. Joining siblings Reinhart, and Milda, Violet was baptized soon after and confirmed in her faith at St. Paul Lutheran Church in Cleveland Ohio in 1941. Violet endured the loss of her beloved father at an early age and learned to be an independent and self-reliant young woman graduating early from Shaw High School in June 1945.
Violet met the love of her life, Harry Zerull, at a Walther League function at St. Paul and they married on April 22, 1949. Blessed with three sons, David, Timothy, and Christopher raised in Willowick, Ohio, the young family transferred to Bethlehem Lutheran Church (Euclid) in 1961 where the Zerull family became active in church and school life. It was Harry that encouraged Violet to become a church organist. In 1975, the family moved to their split-level dream home in beautiful Chardon, Ohio. In 2004, they downsized and moved to Twinsburg where they joined Our Redeemer Lutheran Church in Solon, Ohio. Through the years, a first gift of a giraffe figurine from her dear husband Harry who told her “You’re always sticking your neck out Vi to help others” turned into a lifetime collection of more than 500 giraffes in every shape, size, and artistic medium.
Ever the hard-working employee, Violet was blessed with career opportunities that began in 1945 at the Veterans Administration, serving as a secretary in the medical records department. In 1955, she was hired as a secretary at Euclid General Hospital. In 1957, she began work at the Euclid Clinic and progressed through the ranks to become a highly valued member of the top leadership team. Violet was honored for her many years of dedicated service with the inaugural Vi Zerull Award in 1989, retiring in 1992. She cared for Harry through his struggle with Alzheimer’s Disease until his passing in 2006. With delight during her long life, Violet enjoyed checking off some of her bucket list items of touring destinations in the U.S., Europe, Canada, cruising in the Caribbean, and Alaska, and even camping with sons and families on several occasions. Violet delighted in taking time to share in her children and grandchildren’s lives. Her quick smile, strong faith in God, perfectly manicured nails, love of music, and huge giraffe collection will always be remembered.
Violet is survived by her sons and their spouses, David and Lisa, Timothy and Susan, Christopher and Donna; grandchildren Anne and Scott, Emily and Andrew, and Abigail; great-grandchildren Adeline and Julian; sister Milda Bell and many nieces and nephews.
The family will visit with friends on Saturday, February 4 at 9:30 am at Our Redeemer Lutheran Church which is located at 7196 SOM Center Rd. in Solon, Ohio. A memorial service will then be
held at 10:30 am.