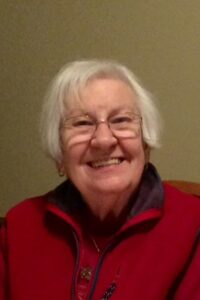 Saundra Mae Evans, 85, joyfully took her first breath in Heaven on Monday, May 23, 2022, at The Avenue, Aurora, Ohio. Born on November 4, 1936, in Litchfield, Illinois, she was the daughter of the late Robert C. Behl and Ethel M. Behl. Saundra was a beloved mother, sister, grandmother, and great-grandmother, and a true friend.

Saundra is survived by her three devoted daughters: Pamela Schechtman (Paul) of Twinsburg, OH, Jennifer Swanek (Frank) of Roaming Shores, OH, and Carey Charlton (Brent) of Fort Wayne, IN. She is also survived by her loving sister, Sharon (Behl)Schuster and her husband, Ronnie of Picayune, MS. Saundra was blessed to have 6 beautiful grandchildren: Michael Ryan, William Joseph (Bethany), Anne Elizabeth (Ben), James Daniel, Kimberly Eileen, and Sarah Mae (Alec). Saundra was a loving great grandmother to Cassidy Anne and Elizabeth Mae (Will and Beth) and Charlotte Eilyn (Anne and Ben).

Saundra lived in most of her life in Chagrin Falls, Ohio, and then made Twinsburg and Solon her homes. She made friends wherever she went. Saundra was a lifelong member of The Eastern Star of Ohio, Golden Rule Chapter #442 in Chagrin Falls, Ohio. She also participated in many woman’s groups such as Primetime with the Federated Church, Jaycee Wives, and the Red Hat Society and Garden Club of Chagrin Falls. Saundra worked for several years at the Twinsburg Hallmark store, making close friendships with her coworkers.

Service is 11:00 am at Steinbauer Funeral Home 33375 Bainbridge Rd. Solon, Ohio 44139 and internment will be immediately after at Evergreen Hill Cemetery 506 South Franklin Street, Chagrin Falls. In lieu of flowers, donations may be made to the charity of one’s choice. Arrangements by Stroud-Lawrence Funeral Home Chagrin Falls, OH. www.stroudlawrence.com