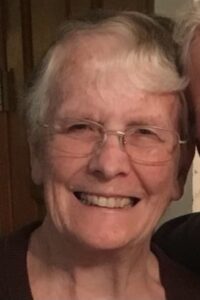 Sally Bay Schultz (nee Wagner), age 85, of Chagrin Falls. Sally was born on May 24, 1936, joining her parents Richard J. and Grace E. Wagner (nee Myers) and brother, Richard W. in South Euclid, Ohio. The family relocated to Bedford, Ohio. She attended Laurel School for grades 8 and 9 before transferring to and graduating from Solon High School in 1954. Sally was seventeen when she met Norm in the end zone of a Solon/Mayfield football game in the fall of her senior year. They’d only been dating a short while when she told him, “I am going to marry you some day!” Sure enough, Sally and Norman were married on June 23, 1956 and immediately settled in their new home in Bainbridge Township where they raised their five children. Over the next 65 years, this home became a gathering place for family and friends as Sally organized and/or hosted holiday meals, birthday celebrations as well as the annual Schultz family reunions.

Sally’s family was her everything. She took great pleasure in being involved and supporting Norm and the children/grandchildren’s participation in all their activities. The United Methodist Church, Boy Scouts, sporting events, band and choral concerts, piano recitals, graduations, and more – no matter the season or the weather. Sally was present to love and support.

Sally enjoyed visiting and learning about new places. Her family travels took her to an Inupiat village in Alaska’s northwest arctic, south to the Florida Keys, and all across the United States. She loved music, square dancing, genealogy, and family game nights. Sally will long be remembered for her “painted” Christmas sugar cookies, spice cakes and especially her amazing apple pies. Sally was deeply loved by her family and will be dearly missed by many. She will forever be remembered for her kindness, patience, ability to forgive and “start again”, her faith, and most of all, her love.

Family will visit with friends Friday, December 17 FROM 2-4 AND 5-8 P.M. AT STEINBAUER FUNERAL HOME, 33375 BAINBRIDGE RD., SOLON. Memorial Services Saturday, December 18, 11 A.M. for relatives and friends at United Methodist Church of Chagrin Falls, 20 Franklin Street, Chagrin Falls, where livestreaming will be available. Interment Roselawn Cemetery, Solon. In lieu of flowers, memorial contributions may be made in her name to the United Methodist Church of Chagrin Falls, Bainbridge Twp. Historical Society or a charity of your choice.