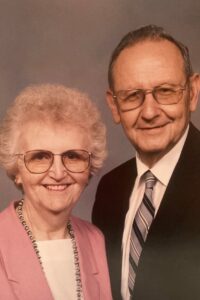 Ruth Ellen Neff Daniels, age 94, passed away peacefully on September 12, 2020 at Ohman Family Living at Holly, Newbury, OH. She was born January 29, 1926 in Detroit, MI to Arthur and Ruth Neff. She graduated from Grosse Pointe South High School in 1944. Following many Neffs before her, including her father, she graduated from the College of Wooster in 1948 with a major in Sociology and returned to the Detroit area to work at Hudson Motor Company. She met Charles M. Daniels, Jr. and accepted his marriage proposal four days later. They were married in 1951 and lived in Lincoln Park, MI until 1969 when they relocated to Chagrin Falls, OH. Ruth’s happiness was rooted in raising her three girls. She supported their school activities and Girl Scouts. She was an active member of The Federated Church for nearly 50 years.

Ruth focused her time and energy on others. She was a warm and welcoming person. She always remembered people on their birthdays and honored them by sending a birthday card. Ruth was active in the Tuesday Morning Ladies bowling league until she was 90 and was known as the “Candy Lady” delivering sweets to the bowlers. Ruth was also well-known for her pies. She won first-place for a blueberry pie she entered in a pie contest during the Blossom Time Festival in Chagrin Falls. She enjoyed sharing her delicious baked goods with family and friends. Ruth’s greatest attributes were her dependability and listening ear; she was a great support to many, young and old alike.

Ruth was preceded in death by her parents; her sister, Jean; her husband, Charlie; and her son, David. She is survived by her brother, Arthur Neff, Jr.; daughters Carol Marcinek, Susan Daniels, and Nancy Johnson; sons-in-law, Robert Marcinek and Jim Johnson; grandchildren, Lauren Marcinek, Kim Johnson Rysell, Christopher Ging, Daniel Marcinek, and Jennifer Ging; and great grandchildren, Charlotte Anne and Natalia Ruthellen Rysell. Charlotte and Natalia were particular lights in Ruth’s life bringing her a source of joy each time she spent time with them. Ruth is also survived by nieces and nephews and many Neff cousins across the country whom she spent time with during biennial Reunions since 1979.

A graveside service will be held at Knollwood Cemetery on Monday, September 21, 1PM where she will be inurned in a plot with her beloved husband, Charlie. In lieu of flowers, donations may be made to The Federated Church, 76 Bell St., Chagrin Falls, OH 44022, Attn: Ruth Daniels Memorial