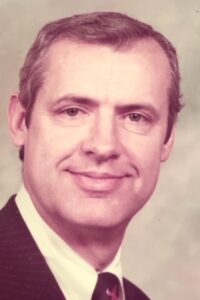 RICHARD L. GROFF, age 95 of Aurora. August 16, 2020. Beloved husband of the late Elizabeth (Betty) nee Mastrocola. Richard was born in Lancaster, PA to the late Frank and Martha Groff. A veteran of WWII, he served in the Army Air Corp for two and a half years. Mr. Groff earned a Bachelor of Science in Economics from Franklin and Marshall College in Lancaster, and continued to University of Pittsburgh, Graduate School of Business earning a Master’s degree. He was a member of Phi Sigma Kappa Fraternity.

He worked for The Higbee Company in Cleveland for 28 years where he was appointed Vice-President of Merchandising. He retired in 1979 and joined Smith Barney, which became Prudential Securities working as a financial advisor for 20 years.