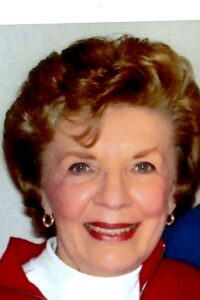 MARY JEAN TEGEL, of Solon, 87, passed away peacefully on Sunday, September 12, 2021. Mary was born on January 1, 1934 in Wilkes-Barre, PA and relocated to Garfield Heights, OH. After graduation from John Adams High School, Mary started her career in the legal department of Third Federal Savings in 1951 and left as head of the legal department support staff to start a family. Mary later became a licensed realtor and worked part time for Century 21 before returning to Third Federal Savings in July 1983. Upon return, she worked part time as the Executive Assistant to the Executive Vice President until she retired in 2002.
She married the late Carl Tegel in 1956 after she and Carl met at a church dance. They built their dream home and moved to Solon, OH in 1967. Mary was predeceased by her loving husband in 2019 after 63 beautiful years of marriage. She is preceded in death by her mother, Mary Hudak , her father John Hudak and her sister, Margaret Hudak. She is survived by her sister Josephine (Gene) Kazubski of Seven Hills, OH. Her marriage blessed them with three children, Sharon (Paul) Marcela, Cynthia (Rick) Crouse and Dave (Esther) Tegel. Cherished grandmother of her seven grandchildren, Lauren Marcela, Kristen (Sam) Totino, Renee (Kyle) Anthony, Natalie Crouse, Nicole Crouse, Nicholas Carl Tegel and Anastasia Mary Tegel.
Mary was a wonderful wife, mother and grandmother. She cared deeply for her family and was happiest surrounded by them. Always supportive and encouraging, always wise and kind, Mary will be remembered for her love of family, caring demeanor, elegance, witty sense of humor, attention to detail and unending resilience. She was a petite woman with a strong Catholic faith and she had a special place in her heart for St. Rita’s Catholic Church. Her strong faith played an integral part in her life as a cancer survivor and heart transplant recipient in 2003. Mary was immensely proud of her family, and leaves behind nothing but beautiful memories.
She was always graceful, even when God called her home.
Mass of Christian Burial Saturday, September 25 10:00 AM at St. Rita Church, 32820 Baldwin Road, Solon. Family will visit with friends at Steinbauer Funeral Home, 33375 Bainbridge Road, Solon from 6-8 PM Friday , September 24.
In lieu of flowers, the family suggests donations to St. Rita Church or the American Heart Association.