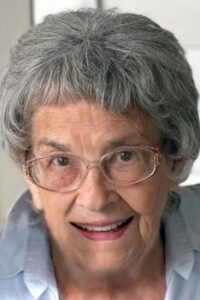 Marion was born in Manhattan, New York, on August 31, 1923, and raised in Bloomfield, NJ. She attended secretarial school after graduation and worked as a secretary for Curtis Wright and General Electric before and during her marriage until her children were born. The family moved several times over the years and settled in Solon, OH. After her children were grown, she worked as an executive secretary for Erickson Tool, which later became Kennametal.

Marion was a caring friend to many. In the early years after retirement, she kept busy driving friends wherever they needed to go, making meals, and delivering them to neighbors and friends, and just helping in any way she could. She enjoyed gardening, nature, cooking, entertaining, and being with family and friends. But most of all, she delighted in watching her grandsons grow up and their visits every summer and Thanksgiving. For the past three years, she resided at The Reserve at Brentwood and enjoyed her new friends as well as the caring staff members.