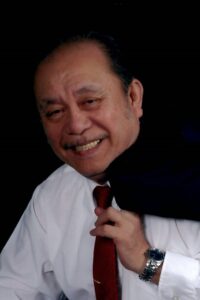 Marcial Morales Aldana, MD, entered into eternal rest on Tuesday, January 4, 2022. Born August 22, 1938 in Pozurrubio Pangasinan, Philippines, he was the son of the late Alejandro Orlarte Aldana, MD and the late Josefa (Morales) Aldana. In 1963, he earned his medical degree from the University of Santo Tomas, Manila, Philippines and after graduation he worked in an American medical mission hospital in Mountain Province, Philippines. In 1968, he came to the United States to continue his medical training at St. John Hospital before completing his anesthesia residency at University Hospitals and Cleveland Clinic. After finishing his training, he remained at the Cleveland Clinic Cardiac Center where he worked for several years as an anesthesiologist. In 1982, he began private practice at Bedford Hospital, Massillon Community Hospital, and Wadsworth-Rittman Hospital. Dr. Aldana additionally served for two years in the Naval Medical Corps at the Naval Hospital at Marine Corps Base Camp Lejune, Jacksonville, North Carolina. After two years, he earned the rank of Captain; he continued in the Naval Reserves until 1994. In 2002 he retired from medical practice, and afterwards enjoyed spending his time cooking, winemaking, gardening, and cultivating various hot peppers, as well as making his family laugh with his jokes and good humor.

Due to the pandemic, visitation will be limited to family and close friends at Steinbauer Funeral Home, 33375 Bainbridge Rd, Solon, OH. Guests and friends will be received at Church of the Resurrection, 32001 Cannon Rd, Solon, OH 44139 on Wednesday January 12, at 12PM for Christian Mass presided by Father Tom Dragga. Livestreaming of the mass will be available. Directly following mass, entombment will be at All Saints Cemetery, 480 West Highland Rd, Northfield, OH 44067. In lieu of flowers, donations can be made to Church of Resurrection at churchofresurrection.org Family request masks be used.