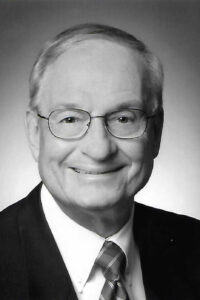 Lynn Edward McGill, age 92, passed away peacefully on September 27, 2021. Lynn was the beloved husband of Sally Louise for 42 years. He is also survived by son Brian McGill (Susan),
daughters Barbara Semroc (Todd) and Judith Srail (Randy), step-daughter Katherine Tiemann (David) and step-sons Thomas Kaminski and Scott Kaminski (Kerry). Lynn was the loving grandfather of twelve, and great grandfather of nine. Lynn attended Bowling Green State University and was a U.S. Army veteran serving in the Korean War. After his military service he joined the IBM Corporation where he held a number of sales and management roles over 35 years. After his retirement from IBM, he worked as a consultant for the Digital Corporation for five years.
Lynn was an Aurora City Council member for twelve years and served as Aurora’s first Council President from 1998-1999. Pursuing his interest in city government he was elected mayor of the City of Aurora and served in that position for 11 years from 2002-2013. He was recognized by the Ohio House of Representatives for outstanding and dedicated service to the City of Aurora, and was named Person of the Year by the Aurora Chamber of Commerce in 2012. He served as the Aurora Community Theater president and was a life-long member of the Aurora Historical Society. Throughout his many years of service to the City of Aurora, his goal was always to act in the best interest of the citizens of the community he loved.
Lynn was a long time member of The Church in Aurora. This was a very important part of his life. He participated on several committees and served as an Elder. In addition, he combined his love of the Lord and music and lent his beautiful tenor voice to the Chancel Choir for many years. It was truly the joy of his life.
A memorial service honoring Lynn’s life will be held on November 10, 2021 at 2:00 pm at The Church in Aurora, 146 S Chillicothe Rd., Aurora, OH. In lieu of flowers please say a prayer in remembrance.