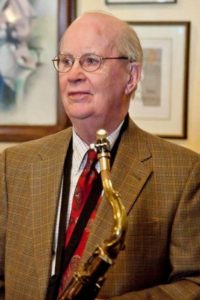 Lawrence Richard “Buddy” Sullivan, 97, was called home to the Lord on May 10, 2020. He was the beloved husband of Ann (Gaither) Sullivan, and the late Florence (Hackett) Sullivan, devoted father of Rick (Peggy), Dave (the late Joanne), Terri Fitzpatrick (Tim), Kathy (Rose Leininger), Tim (Calli), DJ, Dennis, and Peggy (Michael Bloom); and loving stepfather of joAnne deHamel Small (Neil), and Corinne “Kinney” deHamel. Cherished grandfather to 17 grandchildren, 16 great grandchildren, and two great great grandchildren. He was one of seven children of James and Ella (Goggin) Sullivan, and survived by his brother William “Paul” Sullivan of Seattle, WA, and many nieces and nephews.

Lawrence Sullivan was born on a farm near Rochester, MN. on March 4, 1923. After graduating from Stewartville, MN High, he attended Winona State Teachers College but left to pursue a career as a jazz saxophonist, traveling across the country with territory bands – where he met and wed a big band singer, Florence Hackett, known professionally as Joan Roberts, in 1943. They were happily married for 57 years until Florence passed away in 2000.

In June, 1943, he enlisted in the Army and performed with the Army Air Corp’s jazz band selling war bonds for two years before settling in Toledo, Ohio. He earned an accounting degree at the University of Toledo in 1950, and moved to Cleveland in 1968, where he worked as a CPA by day, and jazz saxophonist by night. For many years, he accompanied luminaries including Tony Bennett, Peggy Lee, Sammy Davis Jr., and Frank Sinatra at regional venues. He also helped found the Cleveland Jazz Orchestra and the Cleveland TOPS Swingband, playing gigs at Nighttown and other popular spots until age 92.

Buddy will be missed greatly by generations of musicians who played with him, and by his entire family of musicians. Donations can be made in his memory to the Kira Sullivan Hernandez Memorial Scholarship and to the Local 4 Music Relief Fund of the American Federation of Musicians.