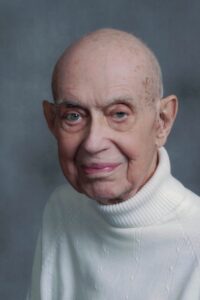 Joseph Henry Baumann was born 5/30/1933 in East Cleveland, Ohio, to Joseph and Mabel (nee Albright) Baumann. He left this earthly world in the early hours of October 30 after a 15-year courageous battle with congestive heart failure. Preceded in death by his loving wife, Patricia, in November of 2007, he is survived by his children; Lowell (Toni) Marquette, Jeffrey (Beth) Marquette, Ann (Floyd) Biery, Susan (Lee) Rosenhamer, Guy (Linda) Marquette, Laura (James) Danko; sister, Joanne Poderis; 17 grandchildren; 34 great grandchildren; and best friend, Judy Marek. Joe attended Fenn College and entered the workforce as an apprentice at Square D Company after high school. He enlisted in the Navy in December of 1955 and served as a Fire Control Technician on the USS Cadmus (AR14) through September 1957. He then continued with his employment at Square D Company as a draftsman after his honorable discharge from the Navy. He, some thought crazily, married Patricia, a widow who already had 5 children in her brood, on July 8, 1961. They added one more child of their own a year later. After 20 years of employment, Square D moved their company to Columbia, SC, and Joe and Pat chose to remain in Solon. Mannesmann-DEMAG became his employer for the next 15 years. He continued working there in the sales department until his retirement in 1988 at the age of 55. After “retirement” Joe began his second career by starting a handyman business. He painted, wallpapered, did home repairs, and too many projects to even count for family, friends and a multitude of customers in the area, the largest being a wooden deck bridge over the pond of a local home. He finally hung up his tool belt in the mid 90’s. Joe had a passion for woodworking which began with remodeling his parent’s kitchen while in high school. He did all the finish work for his own home in Solon and built numerous clock cases, furniture pieces, and was famous for his mini villages he made for family. There was always some sort of woodworking project going on in his basement. The Solon Historical Society had the benefit of him being their curator for 18-years. He thoroughly enjoyed history and this stint was perfect for him. Solon City Schools would send students on a field trips there yearly. He always enjoyed their visits and often recounted the story of one child announcing; “Look, even the people are old here!”. He was an active member of Pioneer Memorial Presbyterian Church from 1964 on serving as Deacon, Elder and was a choir member for over 50 years. A special thank you goes out to his hospice team from the Cleveland Clinic who provided him with excellent care throughout the last three months. Joe, our beloved master gardener, woodworker, builder of things, baker extraordinaire, lover of chipmunks, squirrels and deer, please don’t worry, we’ll make sure the lights are off. Family will visit with friends, Thursday, November 10, from 2-4PM and 6-8PM at Steinbauer Funeral Home, 33375 Bainbridge Road, Solon. Funeral Service will be held Friday, November 11, 1PM at Pioneer Memorial Presbyterian Church, 35100 Solon Road, Solon, Ohio 44139. In lieu of flowers memorials may be made to Pioneer Memorial Presbyterian Church at pioneersolon.org