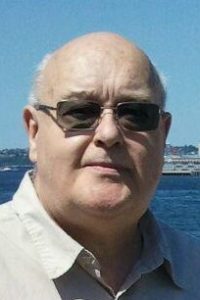 Never without a story, a joke, or a quip of wisdom, Jon Ockunzzi leaves behind a rich legacy of memories for the hundreds of lives he touched throughout his 72 years on Earth. Jon grew up on the Craemer farm next door to Solon High School, where he graduated with the Class of 1965. He then went on to receive his bachelor’s degree from Kent State University. Known to generations of students as “Mr. O,” he was an admired and respected high school math teacher in Solon from 1970 until his retirement in 2000. Between the years of 1993 and 1999, he helped his family run Oh, Books! Bookstore on Aurora Road, having rebuilt most of the interior of the store himself. Mr. Ockunzzi also served his city for 35 years as a dispatcher for the Solon Police Department and the Captain of the Auxiliary Police Force. Later in life, he continued to cultivate friendships throughout the community as owner and manager of Slam Jam’s in Mentor (known to his patrons as “Sammy” — although we aren’t sure why) and co-owner of Slam Jam’s in North Olmsted. Generous to a fault, he was larger than life out of the sheer self-imposed necessity of filling everyone’s hearts with joy whenever possible. Jon will be missed terribly, but never forgotten.