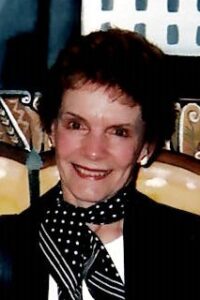 WOHALA, Joan (Williams)…Joan passed away peacefully on December 3rd, surrounded by her three daughters. Joan was born in Shaker Heights, Ohio on September 18, 1932 to Thomas Jervey and Marie (Crowl) Ester Williams. Four years later her younger brother, George, was born. The family then moved to Bedford, Ohio where Joan and George grew up. Joan married her high school sweetheart, Richard Wohala and they promptly started their family of five. Their children included Patty (dec.), Josie Kaczmarek (George), Debbie Garson (Peter, dec.) (Leonard Kichler), Ricky (dec.) (Michelle), and Sandy Blucher (Paul). Joan is also survived by her grandchildren Mike Wohala (Elizabeth), Joey Wohala and Julianne Scrudato (Danny); and Kyle Kaczmarek (MaryBeth); Alex Garson (Keith Goldman) and Ryan Blucher. She was also the proudest great grandmother of Georgie, Logan and Claire Kaczmarek; and Parker Goldman. In addition to her three daughters and their families, Joan is also survived by her loving brother George Williams (Phyllis) and their family. When her children were grown, Joan worked at Mr. Coffee until her retirement. There she met Steve Matyi who became her partner for many happy years until his death on 12/4/12. Joan’s children and grandchildren were her greatest accomplishment. Her greatest sadness in her beautiful life was the loss of her two children, Patty (her first born) and Ricky (her only son); and the loss of her grandson, George Kaczmarek. To know her was to love her. Joan’s greatest joy was being with her children and grandchildren and holidays were spent at her home, beautifully decorated for every occasion, and filled with love and laughter. The family will receive friends Thursday December 8, FROM 4-8 PM at STEINBAUER FUNERAL HOME, 33375 Bainbridge Rd., Solon. Mass of Christian Burial Friday 10:30AM at Our Lady of Perpetual Help Church, 342 S. Chillicothe Rd., Aurora. Private Interment. Donations preferred to Gardens of Western Reserve Hospice, or The Geauga Humane Society Rescue Village, 15463 Chillicothe Road, Russell, Ohio 44072