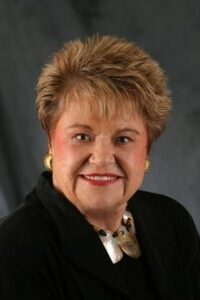 Senator Grace L. Drake, of Solon, Ohio passed away peacefully on December 30, 2020. She was born May 25, 1926 in New London, Ct. Grace was the daughter of the late Daniel and Marion (Wiech) Driscoll and the dearly beloved wife of the late William (Bill) Drake. They were married in New London June 9, 1946. Grace was a loving mother to Sandra (Dale) Sparber, cherished grandmother of John, sister of the late Alan Driscoll (Carol) and Daniel Harvey Driscoll III (Rosemarie, deceased) and adoring aunt of Jay (Sandy), Scarlett, and Rebecca Driscoll. She was a trusted friend to many others who considered her family and a mentor.

Grace was a tireless advocate for the public good, both as a private citizen and while serving 16 years as an Ohio State Senator. Grace had boundless energy, enthusiasm, a caring heart and a love of laughter. She never met a stranger. She was a graduate of WMI (located on Connecticut College Campus). She had an extraordinary career which culminated in her most recent role as Executive in Residence, Director of the Ohio Center for the Advancement of Women in Public Service, at Cleveland State University, where she also received her Honorary Doctorate degree. Beginning in 2001 the Senator founded the Ohio center as part of the Maxine Goodman Levin College of Urban Affairs. Her passionate vision focused on inspiring students to choose public sector careers. The center focuses on student engagement through networking events, career development, and mentoring. The Mentoring Program has helped upwards of a thousand students by matching them with career professionals in the public and nonprofit sectors.

In lieu of flowers, the family welcomes donations to WMI: http://www.williamsschool.org/giving/give-online?ssl=1 and the Levin College Annual Fund for distribution to the College’s Mentoring Program: https://urldefense.com/v3/__https://www.supportcsu.org/levin-college-giving-form__;!!LteP8qmF6ok6!ZalJnl7zfWmr7x6zSVWoLst2lXcPRtI05UkUg_7udM-qMNhNALdcRvbQtmBX3_4TwOeM$
—
Services will be held in the Cleveland area at a later date.