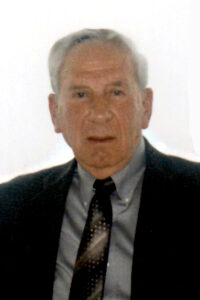 After losing his beloved wife Ginny seven weeks ago, George Kresina, 88 passed away peacefully at his home on Sunday, December 5th, 2021. He will be forever missed, but his many words of wisdom and his charismatic personality will live on in our hearts forever. George’s first love was baseball, but Ginny, his high school sweetheart (married 66 years) was his always and forever. Her wellbeing and happiness always came first. George pitched for John Adams High School with his brother Ken catching. After graduation, he continued to play with Ken and his father Clarence, managed their team, The Sandlot Class D Lou Meliska Pontiacs. The highlight of his career was when he pitched a 23 strike outs, no hitter, 20-0 win, he also contributed two home runs and a double. The team went on to win the Class D championship in Cleveland. In August of 1952, he was signed by The Philadelphia Phillies, but shortly had to leave the team when he was drafted by The United States Army and stationed in Ulm, Germany. He continued to play overseas and pitched for the 110th Infantry Khaki Bills and won the Southern Conference and USAREUR (United States Army Europe) pitching for the 47th Infantry Raiders.
George graduated from The Ohio State University and began his career with The Cleveland Electric Illuminating Company, from which he retired, as manager of the Industrial Marketing Department. He had a passion for golf and considered it a great joy when he was able to “hit the course” in Ohio every month of the year. He enjoyed his fishing trips to Canada with his brother, father and uncle and was always eager to play cards with the boys. He loved his Browns, Buckeyes and Indians and had a flare for maintaining an impeccably manicured lawn and landscaping. Vacationing, antiquing and travelling abroad with Ginny were things he could not get enough of. George was very active in the community, he served on the board of trustees at Grantwood Golf course, the Solon Jaycees/ Exhausted Roosters, Solon Community Church and was the chairman of the 1970 Solon Sesquicentennial Committee. George was a family man in every sense of the word. His wife, children and grandchildren always came first. He was quick to offer advice, lend a helping hand and was ready to jump at a moment’s notice when needed. This kindness extended to anyone who was lucky enough to know, or even just meet, George. He had a warm smile, a contagious laugh, and a naturally welcoming demeanor. Whenever there was a family gathering, George always had “his chair,” and when he sat down, there were always fantastic stories, or important life advice to be shared. In short, George left everyone he came in contact with just a little bit better than he found them. George is preceded in death by his parents Clarence and Gladys, his brother Kenneth and his wife Ginny. He is survived by his daughters, Geri Lyn Hamm and Gineen Nelson (Timothy); his grandchildren, Mark Nelson (Hannah), Patrick Nelson (Marsha), Alicia Nelson, Trevor Hamm, and Garrett Hamm (Mackenzie); and great-grandchildren, Joshua, Jacob, Avalenna, Abigail and Grant.
A celebration of both George and Ginny’s lives will be held at a later date as two of their grandsons are currently deployed overseas.