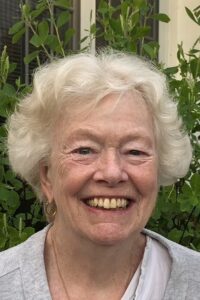 Gail Boardman Kallock of Chagrin Falls, Ohio passed quietly surrounded by family on October 11, 2020. Gail Boardman was born September 5, 1940 in Great Barrington, MA. After graduating Westfield (MA.) High School, she attended the University of Michigan at which she studied Medical Technology, joined Alpha Phi sorority, and graduated in 1962. While at U of M, she met Roger Kallock, her beloved husband of 58 years. After marriage and moves to Cincinnati and Chicago they settled in Lake Lucerne in Bainbridge Township for nearly 50 years. Daughter Carrie (Dennis) Heppner of Chagrin Falls and son Bill (Emily Mack) of Charlotte, VT grew up ‘in the Lake’ where Gail gave her time as President and committee volunteer for many years. All were welcome at “Mother Nature’s” home where especially her grandchildren Dennis William (Kelcie), Shelby, Taylor, Will, and Odin acquired grandma’s love of her garden, the great outdoors, and all God’s creatures. She was “Annie Gail” to nieces and nephews, “Great Grandma” to great-granddaughter Addison Claire (Dennis William), “Aunt Gail” to extended family, and “Gailie” to Roger and close friends. Punctuated by her beautiful red hair and warming smile, Gail was a guiding light of God’s love on this earth. She exuded grace, sensibility, and a sense of humor that touched thousands of lives.

While Gail and Roger traveled, sailed and skied around the world, home was what made her happiest. She looked forward to visits with her sister Betsey (Steve) Asrican of Cary, NC and her family; entertaining and traveling with their many friends; and hosting holidays with the immediate family where she always demonstrated her incredible culinary skill. Gail was an active member and served many ministries at St. Martin’s Episcopal Church; Windfall Profits investment group; a founding member of The Kenston Foundation; a Girl Scout leader; supporter of the arts and culture in Cleveland; and the South Franklin Circle community. More importantly she was a cheerleader, confidant, and teacher to her children, grandchildren, and friends with a calming smile and mischievous wink of the eye. A life well-lived full of adventure and service to others summarizes Gail Kallock.

Gail is preceded in death by her parents William and Rosemary Boardman. Donations in Gail’s’ memory can be made to St. Martin’s Episcopal Church in Bentleyville, The Kenston Foundation, the Judson Foundation, or the Cleveland Orchestra. A private service will be held at St. Martin’s. A public Celebration of Life service will be held at a later date.