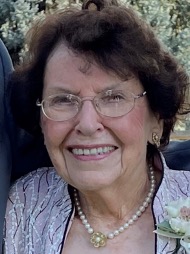 Ellen (Cherko) Sullivan formerly lived in Aurora, Ohio. She graduated from High School in Schenectady, NY in 1946, and then began her professional career as a Secretary at General Electric. She met James Lawrence Sullivan in December of 1949 following his Naval service in WWII, and they married on 5 May 1951. While still in Schenectady, NY, there they were blessed with three sons; David, Cort and Craig. In 1961 they moved to Berwyn, PA and were blessed with three more children; Brian, Tim and Beth. As Jim continued in the corporate world, Ellen remained the “Commander in Chief” of the household. As the consummate Mom, she was always shaping the souls of her children; eversupportive, steadfast, and loving. In addition to a devoted Faith in God, Ellen and Jim instilled a legacy of service in their children, inspiring David, Craig, Brian, and Beth in Naval Aviation careers; Tim in the Army Aviation Supply Corps; and Cort in Dentistry.
Ellen led by example in handling success with humility, challenge with courage, failure with hope, and tragedy with faith. She became a Gold Star Mom at the loss of her son Craig in a Naval
Aviation mishap in Oct 1986. She beat breast cancer twice, endured two major heart surgeries, and lived with blindness for decades; yet her vision for love, loyalty, and friendship was 20/20. Ellen’s life was a testament that strength and stamina can be measured in ways beyond physical. Her iron-will demonstrated an unrivaled resilience mentally, emotionally, and above all spiritually.
Ellen is preceded in death by her husband, James Lawrence Sullivan (Jan 2012); son, LT Craig Lawrence Sullivan, USN (Oct 1986), and son, Timothy Mark Sullivan (Apr 2022). Survivors include her son David M. Sullivan, Cort P. Sullivan, James Brian (Susan) Sullivan, and Beth Anne (Robert III) Creighton; 11 grandchildren, 2 great grandchildren, 10 nieces / nephews, and 17 grandnieces / grandnephews.