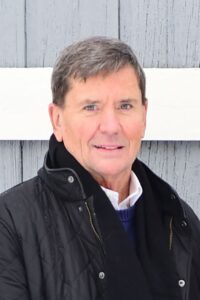 Dennis “Denny” Buss, age 76, lost his battle with cancer on September 14, 2022. On September 12 he came home from the hospital under hospice care. On September 13, he looked at his wife Debbie, of 52 years and said, “I want to go home.” The next morning, his Lord granted his desire and called him to his Heavenly home. He was with his family and faithful dog, Marley, who never left his side.
Denny was born in Martin, Ohio on July 8, 1946 to Arthur and Betty Buss. He graduated from Start High School where he played baseball and basketball and set a Toledo record for the most consecutive free throws which he held for many years. Denny graduated from Bowling Green State University where he met Debbie. He was drafted out of graduate school and served his country in the Army in Vietnam. After service, he attended Toledo Law School. Denny was a corporate attorney for Midland Ross Corporation for 10 years and then the General Counsel for Van Dorn Demag which later became Sumitomo Demag Plastics Machinery, North America from 1987 until the week before his death.
Denny enjoyed his work, but nothing meant more to him than his family and faith. He was blessed with two children whom he adored and they loved him back, David and Sarah. Sarah married Scott Weghorst, who Denny loved as a son. Sarah and Scott blessed him with three wonderful sons, Taylor, Ethan, and Crew. Denny was the happiest man on earth when he was with his family. He made holidays and vacations extra fun and special. Denny is also survived by his dear brother Rick (wife Bev), and their children Bridgette and Bradley. He is also the uncle to Ali (Tim) Weeks and Seth Schueler.
Denny had a quiet but deep faith in Jesus. Neighbors in the 1970’s invited Debbie and Denny to their home for a weekly bible study. In their own time, they each accepted Jesus as their Lord and Savior. Denny enjoyed attending Parkside Church in Bainbridge Twp. He also loved listening to Dr. Charles Stanley. Because of his faith, he trusted that he was guaranteed eternity with his Heavenly Father. He is missed terribly by those who love him, but those who have a personal relationship with God, know it is not goodbye.
There will be a memorial service at Parkside Church on Thursday September 22, at 4:30PM. In lieu of flowers and should friends desire memorials may be made to Crossroads Hospice and Palliative Care, 3743 Boettler Oaks Drive, Suite E, Uniontown, Green, Ohio 44685, Wounded Warrior Project www.woundedwarriorproject.org, or Samaritans Purse www.samaritanspurse.org
For a livestream of the memorial service please visit: https://pkschurch.com/BussMemorialService