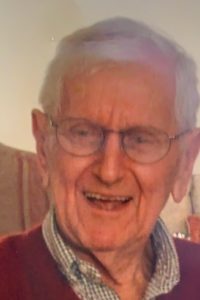 Age 96, of Chagrin Falls, passed away on April 18, 2020 from COVID-19 at Anna Maria Nursing Home. He was born in Newark, OH to the late Daniel J. Corcoran and Vivian (Primrose) Corcoran. Brother to James Corcoran and Maxine Williams (both deceased). Beloved and devoted husband to Beverley for 71 years. Loving father to Melanie Corcoran (Joe Rock) of Chagrin Falls, OH; Daniel R. Corcoran, Jr.(Julianne) of Fishers IN; and Philip Corcoran,Sr.(Anne) of Leesburg, VA. Dear grandfather to Jackson Rock of Chagrin Falls OH; Kathryn Corcoran of Findlay, OH; Caroline Corcoran of Fishers, IN; Daniel R. Corcoran III of Fishers, IN; Alice Corcoran of Brooklyn, NY; and Philip Corcoran, Jr. of Leesburg, VA.
Daniel enlisted in the US Navy in WWII and served as a radioman on the Destroyer Escort, USS Ahrens where he served on many missions in both Atlantic and Pacific theaters and received two bronze stars. He maintained his devotion to the Navy and attended annual DESA conventions. One of the highlights of his life was going on the Honor Flight to Washington D.C. Immediately after the war, Daniel attended Otterbein College and graduated in 2 ½ years. He attended Marshall Law School (now Cleveland Marshall). He started a law firm in Euclid; McBride, Amirault and Corcoran. After many years, he moved his practice to Chagrin Falls where he continued to practice, finally retiring at the age of 89. Daniel was passionate about community involvement, he believed in giving back, and he led an active civic life, he was a member of many service organizations and Boards:, Boy Scouts of America District Commissioner, Euclid YMCA Board, Euclid Library Trustee, Euclid General Hospital Governors Board, 32nd Degree Mason, Rotary Club Board and President, and he was quite active in the Ohio Lawyers Assistance Program. He was a friend of Bill W. for 40 years. He was most proud of being appointed by Judge Talty to serve on the Cleveland Metroparks Board of Commissioners where he served for 9 years during the building of the Cleveland Zoo’s Rainforest. He traveled to China and Malaysia to obtain agreements for long term animal exchanges and exhibits for the Rainforest. He believed that the Metroparks are Cleveland’s greatest asset.
Daniel and Beverley were faithful, lifelong members of the Episcopal Church and attended St. Martin’s Church, Chagrin Falls for over 50 years. Daniel was known for his legal prowess and for his civic involvement, but he will also be remembered for his sense of humor, the twinkle in his eye, his quick wit, and his help and compassion to those in need. He loved his children and always asked when they would visit again. He was an attentive, devoted grandfather who often made the grandchildren laugh hysterically and kept a stash of candy for them. He also greatly valued his friends and maintained friendships for decades. He requested donations be made to St. Martin’s Episcopal Church Memorial Fund, 6295 Chagrin River Rd., Chagrin Falls, OH 44022. Due to the current terrible pandemic, the Memorial Service will be at a later date. IF YOU WOULD LIKE TO ATTEND THE MEMORIAL SERVICE, PLEASE SEND AN EMAIL TO: roxiekitcat@gmail.com and we will advise of details when available. Arrangements by Steinbauer Funeral Home, 33375 Bainbridge Rd., Solon OH 44139. (440)248-6088