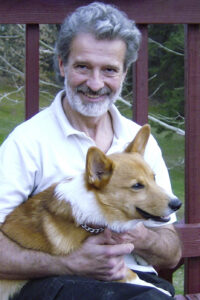 Our dearest Carl, son (Betty & Carl, both deceased), brother (Beth, Linda Jim & Terrie & Jim Lavelle) and father (Mathew & Benjamin) passed away on Saturday August 20th after a prolonged illness. He was such a joy and inspiration to everyone who was fortunate enough to know him. And oh that smile! It could light up a room!
Funny, so smart and generous, Carl was passionate about his art and teaching and compassionate toward everyone he encountered especially those he loved. He adored his sons and he taught them so much–especially how to have FUN, but then, he taught everyone how to have FUN! He encouraged those around him to look deeply at and learn as much as they could from the world around them and to value knowledge as something that would enrich their lives.
Even after his accident Carl found true joy being in nature and we often went to a local park for long walks. And then there were the dogs in his life. They brought him so much pleasure and they adored them.
Carl graduated from Collinwood High School in January 1966, where he was the school photographer, having found his life’s work when he was young (Carl Sr. had everything to do with that!). He then went to Rochester Institute of Technology and SUNY Buffalo where he received his MFA in Photography.
In 1972 Carl began his 35-years long career at the very prestigious Cranbrook Academy of Art in Bloomfield Hills, Michigan. Carl loved Cranbrook and he was a lifelong mentor to his students. His philosophy on life, and his endless curiosity about everything in the universe (literally) had a lasting impact on everyone he met. In 2009 Carl was named Honored Educator by the Society of Photographic Educators. He taught those around him to love learning the way he did.
Here are some thoughts from one of his former students, colleague and friend, Rick Bolton:
Educated in both photography and literature, Carl was an important part of the movement to establish photography as an art form in the 1970s. His work was a self-conscious and playful investigation into the ways that photography records reality, using collage, Polaroid instant photography, and in later works, xerography, to transform toylike objects into witty and elegant works of art. His works were shown throughout the United States and are retained in numerous permanent collections, including the Museum of Modern Art in New York, the San Francisco Museum of Art, and the International Museum of Photography in Rochester.
He further helped to establish photography through his tenure as head of the Photography Department at Cranbrook Academy of Art, the first to hold that position. As a teacher, he was inclusive and supportive, receptive to a variety of styles and approaches, but always pushing students toward greater self-awareness. A lover of photographic history and theory, he provided students with a deep understanding of the medium, placing photography in a wide cultural and intellectual context that was useful and undogmatic. He was, as much as was practical, also a friend to his students. (The softball games he hosted on the Cranbrook lawn will not be forgotten.)
In the summer of 2004 Carl was injured a bicycle accident, which eventually ended his teaching career. In 2011 Carl had a stroke, which left him severely disabled.
Those who knew Carl all feel blessed to have had such a wonderful spirit/man in our lives and we are comforted knowing that he isn’t suffering any longer. GODSPEED CARL. Live long and prosper! We love you and will miss you forever.
Friends received at the Kindrich McHugh-Steinbauer Funeral Home, 33375 Bainbridge Rd. from 4-8 p.m. Friday. Interment Foxfield Preserve Cemetery in Wilmot, OH.
Memorial Donations to your favorite charity in Carl’s memory.