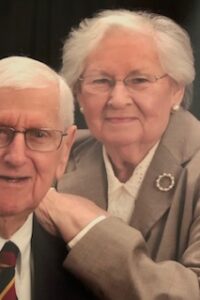 BEVERLEY E. CORCORAN
Age 94, of Chagrin Falls, passed away on June 22, 2021, at Anna Maria Nursing Home. Born January 28, 1927 in Brookville, PA to Mildred Hancock and James P. Hawthorne. Beloved and
devoted wife to Daniel R. for 71 years. Loving mother to Melanie Corcoran (Joe Rock) of Chagrin Falls, OH; Daniel R. Corcoran, Jr.(Julianne) of Fishers, IN; and Philip Corcoran, Sr.
(Anne) of Leesburg, VA. Dear grandmother to Jackson Rock of Chagrin Falls OH; Kathryn Binell (Andrew) of Findlay, OH; Caroline Corcoran of Fishers, IN; Daniel R. Corcoran III of
Fishers, IN; Alice Corcoran of Brooklyn, NY; Philip Corcoran, Jr. of Leesburg, VA. Beverley was raised in Brookville, PA and lived with her mother and loving grandparents Elizabeth and Walter
Donaldson until age 10. Beverley, her mother, and her stepfather, Weldon Hancock, moved to Squirrel Hill, Pittsburgh, PA. She graduated with a degree in Biology, in 1948, from Otterbein
College in Westerville, OH. Upon graduation, she married her life long partner and husband, Daniel whom she met at Otterbein College.. They moved to Cleveland, OH where Daniel
graduated from Cleveland Marshall College of Law. Early on, Beverley was employed by Cleveland Graphite as a chemist and then by C.S. Harris Realty in Chagrin Falls. She then
worked at the Genetics Center at CWRU, where she enjoyed her career in science again, until she retired. Beverley and Daniel resided in the Cleveland area for over 70 years: starting in
Willowick, Euclid, and finally in Chagrin Falls. Beverley was an active and faithful member of St. Martin’s Episcopal parish in Chagrin Falls, OH. Her service to St. Martins included : Daughters of the King, Journeying Group, tutoring, and various volunteer efforts. Her faith was a central aspect of her life and she was of service to all. Beverley was active in: The Garden Club of Euclid, Bridge Club, and the Chagrin Valley Women’s Club. Beverley was a devoted wife, mother, and grandmother. Most of all, Beverley cherished her time with her children and
grandchildren. She was a Friend Of Lois for over 40 years. She was a woman of great strength, had a good sense of humor, and was known for her patience and wisdom, and her generous, helping spirit. She requested donations be made to St. Martin’s Episcopal Church Memorial Fund, 6295 Chagrin River Rd., Chagrin Falls, OH 44022. A Funeral Service for both Daniel (d. 2020) and Beverley will be held on Friday, August 6, 2021,11:30am, at St. Martin’s Episcopal Church, 6295 Chagrin River Rd., Chagrin Falls, OH 44022. A luncheon will follow immediately after the Funeral Service in Burroughs Room (St. Martin’s Church). Arrangements by Steinbauer Funeral Home, 33375 Bainbridge Rd., Solon OH 44139.