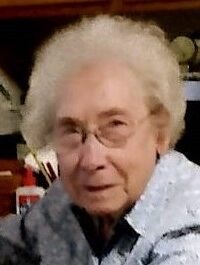 Betty Lois (Franks) Ryan. October 31, 1926-March 29, 2021.
Betty was born at home in Noble County, where her family farmed. The second youngest of eight children to
Chris and Emma (Ayers) Franks, she graduated from Belle Valley High School on May 17, 1944.
On February 25, 1950, she married Robert James (Bob) Ryan. They were married for 61 years. Together
they had three children, and they spent much of their golden years visiting and keeping up with their six
grandchildren.
Betty was a homemaker, whose true joy was creating a life with her husband and children. She was
involved with their scout troops and softball teams. They took family road trips and enjoyed camping.
She and Bob loved to spend time with their grandchildren. She taught them how to bake cookies, sew,
cook, and can produce. She enjoyed singing hymns with her grandchildren and shared a piano bench with
them as they accompanied themselves. She played pick-up games of softball well into her 70s and was
always the team’s pitcher. As they grew up, Bob and Betty continued to support them, watching them play
softball and baseball, and perform in marching band.
Betty loved to work in the yard, especially in the garden, and go for walks. She had a remarkable
houseplant collection, including a 100+-year-old Christmas cactus and several shamrock plants.
A devout Christian, Betty was a member of the Federated Church of Chagrin Falls, where was a
kindergarten Sunday school teacher for many years, and until recently, participated in a church quilting and
sewing group.
An engaged citizen, Betty regularly served as a poll worker for Geauga County on election day. As an Avon
saleswoman for several decades, she developed friendships and acquaintances through her work. A faithful
correspondent, she enjoyed writing and receiving letters from her friends and family around the country.
Everyone looked forward to her famous potato salad at family reunions and picnics. Her signature pickles,
made from her garden cucumbers; grape jelly and strawberry jam, made from fruit that she harvested; and
hickory nut birthday cakes were all savored by loved ones.
Betty took great pride in her family, and her favorite times were spent in their company.
Survived by her children Sheryl (Paul) Weidman of Grapevine, TX; Kelley Ryan of Zanesville, OH; and Dale
(Beth) Ryan of Chagrin Falls, OH; grandchildren Emily Ryan of Lawrence, KS; Benjamin (Jie) Weidman of
Austin, TX; Eileen (Tim) Ryan of Farmville, VA; Daniel Weidman of Houston, TX, Jeremy (Candice) Ryan of
Nashport, OH; and Thomas Weidman of Austin, TX; and a great-grandson, Ezra Weidman.
She was preceded in death by her husband Robert James Ryan, daughter-in-law Marcia Ryan, 2 brothers
and 4 sisters.
In lieu of flowers, donations may be made to the American Heart Association
Funeral Services with Zoom option Friday April 2, 11AM at STEINBAUER FUNERAL HOME, 33375 BAINBRIDGE RD., SOLON, where family will visit with friends FROM 4-8 PM THURSDAY.