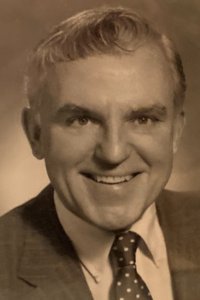 Bernard Patrick (Pat) Doyle was born on September 24, 1933 and headed for home on January 4, 2021. Pat was preceded in death by his parents, Leo and Eunice (Ryerson) Doyle of Alliance, Ohio, and his grandson, Jack. He is survived by his wife, Glenna Jean (Martin) Doyle, with whom he recently celebrated 65 years of marriage, his children, grandchildren, and great grandchildren. No father could have been prouder of his children: Michael (Judy), Kathleen Neumaier (Tim), Brian (Kathy), Stephen (Ali), and his grandchildren, Alison, Dana, Kaitlin, Danny, Molly, Timmy, Maggy, Mike, Kelly, Megan, and Tommy.

Pat grew up in Alliance, OH and attended St Joseph grade school and Alliance High School where he excelled on the basketball court and on the baseball diamond. It was at Alliance High School that he met is life-long love, Jean. After high school graduation in 1951 he attended Marquette University, earning a degree in Journalism, and then served in the peace time U.S. Army, stationed in Germany. Following the death of her mother in 1954, Jean flew to Germany where she and Pat were married in a Catholic ceremony in 1955. They honeymooned in Switzerland and traveled extensively in Europe during their first year of marriage, returning to Ohio at the end of Pat’s duty. Pat moved to Milwaukee with his bride and eventually settled in Whitefish Bay where the couple raised their family of four children. He was employed in the public relations and advertising industry by firms including Hoffman-York, Rex Chain Belt, and Outboard Marine Corporation, and was one of the fortunate few who are paid to do what they love (in Pat’s case, talking and socializing). He continued his athletic activities and was a well-known “gym fly”, playing pick-up basketball in gyms throughout the Milwaukee area. He also was an avid softball player and on several occasions led the Whitefish Bay Over 30 Classic League in hitting, employing a sweet left handed swing that sent line drives to all fields. When not participating himself he coached grade school basketball and Little League baseball and was a die-hard sports fan, particularly when it came to rooting for his children, and later for his grandchildren, in whatever sporting venture they undertook.

Shortly after his children graduated from high school, Pat took a position with Yamaha Corporation and he and Jean moved briefly to St. Louis. Eventually they returned to their home state of Ohio, residing in Twinsburg, where Pat finished out his career with Adams/Huebcore Publishing, briefly teaming up with youngest son, Steve, to create a dynamic sales duo. After retirement in 2000, Pat spent his time following sports, especially his beloved Cleveland Indians and Browns, Notre Dame football, and Marquette basketball. He made numerous friends and untold number of acquaintances through his many years of playing and following sports and will be missed by many.

We wish to thank the staff at Maplewood at Twinsburg who cared for Pat in his declining later years. A funeral mass will be held at The Catholic Church of St Rita in Solon on January 9 at 10:30 AM. Donations in Pat’s name may be made to St Rita or Marquette University.

“But in the night, beyond the fight, the player finds his rest, at last” – Grantland Rice.