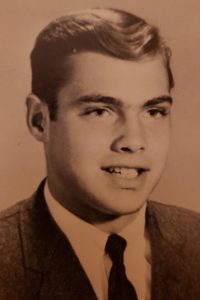 Ted Spent his life in the Steel Industry as a Salesman and later as a Manufacturers Rep. He loved his work and the people he worked with and for. His hobby outside of family and work was golf. He loved spending time with people and friends on the course and to his credit he had two holes in one during his lifetime, but you would never know because he was not a boastful man. He was a man of the people. He loved the little people. If you were in his life in any capacity, he wanted to know everything about you. He loved helping people. His friends were everything to him. He would memorize your phone number and your birthday. He would always send cards and letters to people that were in his life and he kept a file on everyone and everything.

Teddy was very proud of his time at the Peddie School in Hightstown, New Jersey. There he was the Captain of the varsity soccer team and the Baseball team. He was in the glee club, the drama club, the octets and the 41’ loungers committee. He was voted by his classmates as the most respected classman, the most handsome and the senior lady killer. He then went on to MacMurray College in Jacksonville Illinois where he received his degree in Religious studies. After College he went to work for Inland Steel Bar Company in Chicago for 22 years and then went on to work for Nelson Steel company for another 10 years. He then went on to start his own company Day Metals where he was a manufacturers rep until he retired in 2017.

In the later years his focus became the care and comfort of his wife Pammie. He always wanted to make sure that she had what she needed when she needed it. He was diligent, stern, assertive and unrelenting. He would always ask how you were and what you were doing before he would ever talk about himself. If you wanted to know where a good place to eat and grab a drink was, he knew them all and he could name everyone that worked there from the Vila Blue in Illinois to his most recent favorites, Café Tuscano, Mad Jacks in Aurora Ohio and Cucina Rustica in Chagrin falls.

Finally, he had a few sayings, and this does not cover them all. “Don’t sweat the small stuff” “Keep a cool tool” and “Make a little money and have a few cocktails”

You will be forever missed and never forgotten. You are a legend. Watch over us always.

Teddy was cremated at the Steinbauer Funeral home. In leu of flowers, please make a small donation to the Heroes First Foundation at www.heroesfirstfoundation.org

A memorial event will take place in Chicago Illinois sometime in April or May at a Venue to be determined.